Erectile dysfunction, sometimes called “impotence,” is the repeated inability to get or keep an erection firm enough for sexual intercourse. The word “impotence” may also be used to describe other problems that interfere with sexual intercourse and reproduction, such as lack of sexual desire and problems with ejaculation or orgasm. Using the term erectile dysfunction makes it clear that those other problems are not involved.

In older men, ED usually has a physical cause, such as disease, injury, or side effects of drugs. Any disorder that causes injury to the nerves or impairs blood flow in the penis has the potential to cause ED. Incidence increases with age: About 5 percent of 40-year-old men and between 15 and 25 percent of 65-year-old men experience ED. But it is not an inevitable part of aging. 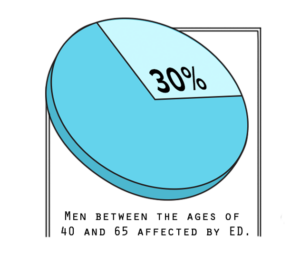 ED is treatable at any age, and awareness of this fact has been growing. More men have been seeking help and returning to normal sexual activity because of improved, successful treatments for ED. Urologists, who specialize in problems of the urinary tract, have traditionally treated ED.

Since an erection requires a precise sequence of events, ED can occur when any of the events is disrupted. The sequence includes nerve impulses in the brain, spinal column, and area around the penis, and response in muscles, fibrous tissues, veins, and arteries in and near the corpora cavernosa.

Damage to nerves, arteries, smooth muscles, and fibrous tissues, often as a result of disease, is the most common cause of ED. Diseases, such as diabetes, kidney disease, chronic alcoholism, multiple sclerosis, atherosclerosis, vascular disease, and neurologic disease – account for about 70 percent of ED cases. Between 35 and 50 percent of men with diabetes experience ED.

Lifestyle choices that contribute to heart disease and vascular problems also raise the risk of erectile dysfunction. Smoking, being over–weight, and avoiding exercise are possible causes of ED.

Surgery can injure nerves and arteries near the penis, causing ED. Injury to the penis, spinal cord, prostate, bladder, and pelvis can lead to ED by harming nerves, smooth muscles, arteries, and fibrous tissues of the corpora cavernosa.

Decreased levels of testosterone can cause erectile dysfunction.

In addition, many common medicines blood pressure drugs, antihistamines, antidepressants, tranquilizers, appetite suppressants, and cimetidine (an ulcer drug) can produce ED as a side effect.

How is ED diagnosed?

Patient History – Medical and sexual histories help define the degree and nature of ED. A medical history can disclose diseases that lead to ED, while a simple recounting of sexual activity might distinguish among problems with sexual desire, erection, ejaculation, or orgasm. Using certain prescription or illegal drugs can suggest a chemical cause, since drug effects account for 25 percent of ED cases. Cutting back on or substituting certain medications can often alleviate the problem.

Physical Examination – A physical examination can give clues to systemic problems. For example, if the penis is not sensitive to touching, a problem in the nervous system may be the cause. Abnormal secondary sex characteristics, such as hair pattern or breast enlargement, can point to hormonal problems, which would mean that the endocrine system is involved. The examiner might discover a circulatory problem by observing decreased pulses in the wrist or ankles. And unusual characteristics of the penis itself could suggest the source of the problem, for example, a penis that bends or curves when erect could be the result of Peyronie’s disease.

Laboratory Tests –Several laboratory tests can help diagnose ED. Tests for systemic diseases include blood counts, urinalysis, lipid profile, and measurements of creatinine and liver enzymes. Measuring the amount of free testosterone in the blood can yield information about problems with the endocrine system and is indicated especially in patients with decreased sexual desire.

How is ED treated?

Most physicians suggest that treatments proceed from least to most invasive. For some men, making a few healthy lifestyle changes may solve the problem. Quitting smoking, losing excess weight, and increasing physical activity may help some men regain sexual function.

Cutting back on any drugs with harmful side effects is considered next. For example, drugs for high blood pressure work in different ways. If you think a particular drug is causing problems with erection, tell your doctor and ask whether you can try a different class of blood pressure medicine.

Psychotherapy and behavior modifications in selected patients are considered next if indicated, followed by oral or locally injected drugs, vacuum devices, and surgically implanted devices. In rare cases, surgery involving veins or arteries may be considered.

MIU is proud to offer Duolith

Experts often treat psychologically based ED using techniques that decrease the anxiety associated with intercourse. The patient’s partner can help with the techniques, which include gradual development of intimacy and stimulation. Such techniques also can help relieve anxiety when ED from physical causes is being treated. 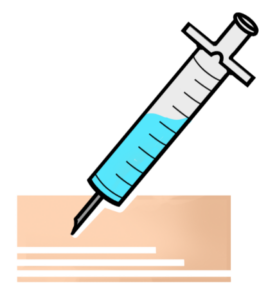 Drugs for treating ED can be taken orally, injected directly into the penis, or inserted into the urethra at the tip of the penis.

Viagra, Levitra, and Cialis all belong to a class of drugs called phosphodiesterase (PDE) inhibitors. Taken an hour before sexual activity, these drugs work by enhancing the effects of nitric oxide, a chemical that relaxes smooth muscles in the penis during sexual stimulation and allows increased blood flow.

While oral medicines improve the response to sexual stimulation, they do not trigger an automatic erection as injections do.

None of these PDE inhibitors should be used more than once a day. Men who take nitrate-based drugs such as nitroglycerin for heart problems should not use either drug because the combination can cause a sudden drop in blood pressure. Also, tell your doctor if you take any drugs called alpha-blockers, which are used to treat prostate enlargement or high blood pressure. Your doctor may need to adjust your ED prescription. Taking a PDE inhibitor and an alpha-blocker at the same time (within 4 hours) can cause a sudden drop in blood pressure.

Many men achieve stronger erections by injecting drugs into the penis, causing it to become engorged with blood. Drugs such as papaverine hydrochloride, phentolamine, and alprostadil (marketed as Caverject) widen blood vessels.

A system for inserting a pellet of alprostadil into the urethra is marketed as Muse. The system uses a prefilled applicator to deliver the pellet about an inch deep into the urethra. An erection will begin within 8 to 10 minutes and may last 30 to 60 minutes.

Research on drugs for treating ED is expanding rapidly. Patients should ask their doctor about the latest advances.

Mechanical vacuum devices cause erection by creating a partial vacuum, which draws blood into the penis, engorging and expanding it. The devices have three components: a plastic cylinder, into which the penis is placed; a pump, which draws air out of the cylinder; and an elastic band, which is placed around the base of the penis to maintain the erection after the cylinder is removed and during intercourse by preventing blood from flowing back into the body.

One variation of the vacuum device involves a semirigid rubber sheath that is placed on the penis and remains there after erection is attained and during intercourse. 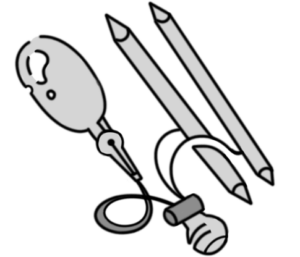 Implanted devices, known as prostheses, can restore erection in many men with ED.

Malleable implants usually consist of paired rods, which are inserted surgically into the corpora cavernosa. The user manually adjusts the position of the penis and, therefore, the rods. Adjustment does not affect the width or length of the penis.

Inflatable implants consist of paired cylinders, which are surgically inserted inside the penis and can be expanded using pressurized fluid. Tubes connect the cylinders to a fluid reservoir and a pump, which are also surgically implanted. The patient inflates the cylinders by pressing on the small pump, located under the skin in the scrotum. Inflatable implants can expand the length and width of the penis somewhat. They also leave the penis in a more natural state when not inflated.